In Sept 2008, farmers in the fertile Haystack area north of Warra received letters informing them that a Mineral Development Licence MDL383 had been granted to Qld Government owned Tarong Energy to mine coal in an open cut pit for 18klms through the heart of the prime farming area. The mine was planned to devastate 13,000 hectares of prime agricultural land, and would isolate dozens of families and many thousands of hectares of prime farmland from their natural delivery point of the Warra silos, and the township of Warra.

Tarong Energy made it clear that the area was attractive to them because of the good infrastructure: road, rail, power, services, and flat cleared farming country easy to mine, all the services the farmers had struggled to provide over the last century or more. 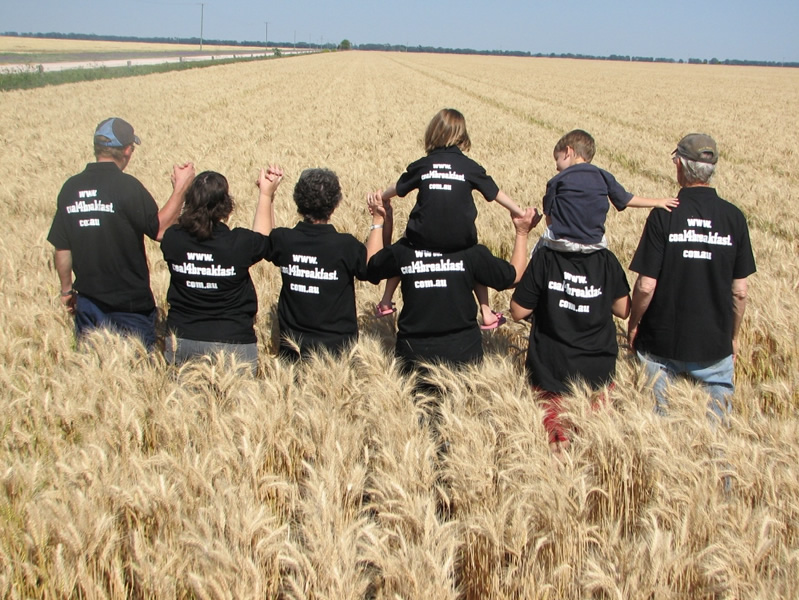 The coal was all to be exported through the Port of Brisbane, and, as coal was mined and shipped every day, the railway would grant priority to coal, making the grain handling complexes that farmers had originally developed as co-operatives in the previous 70 years superfluous. Already, with the advent of the Macalister mine and the Columboola mine, only very odd shipments of grain were possible, and the heavy transport trucks to Brisbane increased exponentially. This put massive pressure on the road system, and the condition of the roads had deteriorated greatly.

Currently (2021), with the Macalister mine closed, shipments of grain and cattle are again beginning to find their way down the tracks.

The whole community considered the proposal that prime farmland be sacrificed for a short term mine unbalanced, and they united behind a committee that became known as Coal4breakfast. The premise for the opposition was that there are many millions of hectares of Queensland where equivalent coal could be mined, and that it was extreme folly to be destroying our best food bowls by destructive mining when there were alternatives of low productive areas available.

This struck a chord with a whole range of people, and we had members join from all over the nation and even internationally. We weren’t against mining, we just felt that it should be done where it was in the best national interest with a view to maintaining our best food bowls in prime productive condition.

Members wrote thousands of letters, attended dozens of protests and hundreds of meetings. Our local Landcare group (Brigalow Jimbour Floodplain Group) provided a secretariat, the Warra Progress and Heritage Society Inc and many other community groups did everything in their power to help. One example of our campaign is the video shown in the link below. It is done by Angie Olm and features her father Nevin Olm, Project Officer of the BJFP.

Although everyone we spoke to recognized the validity of our arguments, it was not possible to escape the NIMBY (Not In My Back Yard) profile.

At the time, there were other prime agricultural areas coming under threat from coal mining, including Felton near Toowoomba and the Golden Triangle at Gindie in Central Queensland. Their members faced the same NIMBY coalface we did.

Recognising this, some of our supporters who were mostly not under threat from mining decided to form a new group to negotiate with government from a level that could not have NIMBY levelled at them.

This group was FutureFoodQld (FFQ) and was formed in 2009. Co-chairs were Geoff Hewitt from Macalister and Charlie Wilson from Comet, Central Queensland. Neither were under any threat of mining, and gave their time and services generously and without any reward or recompense. Both had been National Chairs of major producer bodies and brought great experience and respect to the group. Other members were Andrew Bate from Gindie and Jeff Bidstrup from Warra.

FutureFoodQld was able to open doors to the government and industry, and held dialogue with the Qld Resources Council which gained some common ground.

The Qld Government then set up working committees to examine how Strategic Cropping Land legislation could be drafted and work for everyone’s benefit. The effort went on for several years and the proposed mines were put on hold due to the prospect of legislation. FFQ members attended dozens of meetings with Qld Government Dept of Natural Resources and Mines and other interested parties to try to nut-out workable legislation.

Finally, in December 2011 Anna Bligh’s Labour Government passed legislation called the Strategic Cropping Land Act. It was in the last legislative sitting of the Bligh Government before it lost office.

The SCL legislation was a first for any Australian state and has since been used as a basis for legislation in other states. That a community like Warra can be the catalyst for ground-breaking change in the national (and international) perception of what is acceptable and what is not when it comes to the application of our natural resources for use as an enduring food bowl, or to be wasted by a short term destructive mine, is surely a hallmark of a mature and thoughtful society.

Many, many people gave a great deal without any thought of recompense or recognition, and this building is to thank and honour them. Some gave tacit assistance, and even opposition groups like the Qld Resources Council worked productively and thoughtfully to get the outcome we did.

Whilst there were hundreds of people who should be recognized, there are a few who cannot go unrecognized.

Explore Warra Queensland, and Discover One of Australia’s Hidden Treasures